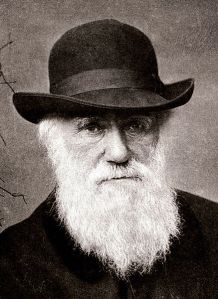 The curtains go up. On the Origin of Species, published on 24 November 1859 by Charles Darwin is considered (correctly I would argue) to be the foundation of evolutionary biology. Its original full title was On the Origin of Species by Means of Natural Selection, or the Preservation of Favoured Races in the Struggle for Life which was later changed around 1872 to the shorter, The Origin of Species. It was perhaps felt that “the preservation of favoured races” sounded dubiously racist when in fact this wasn’t what the title was referring to at all. Of course the last thing anybody would do is falsely co-opt evolutionary theory to promote their own despicable and prejudice agenda. Right?

Darwin’s book introduced the scientific theory of natural selection. I am aware of the excellent work of Alfred Russell Wallace and you should definitely watch Bill Bailey’s brilliant TV series on the topic. However I’ve probably got enough work on my hands tenuously claiming that one set of original prose about natural selection should be a musical, without throwing Wallace into the mix. Notable in that it was not written specifically for a scientifically literate audience, The Origin of Species methodically and eloquently sets out the evidence and arguments for  the theory that the diversity of life on Earth arose by common descent through a branching pattern of evolution.  All any book by Dan Brown can say is that it’s thoroughly absorbent. It is not too much of a leap to say that modern evolutionary theory is the unifying concept of the life science and that little in biology makes sense without it. It’s a good theory.

Is the theory of evolution so good however that it can’t be improved by singing? Musical theatre as an art form combines songs, spoken dialogue, acting, and dance to communicate a story and its emotional content. It’s a bit popular. 12.27 million tickets were purchased for Broadway musical shows in 2007-2008. In 2007 total ticket revenues in Central London in the major commercial and grant-aided theatres were £469.7 million. Musicals are not just popular in theatre. Les Misérables, as a film aided by the singing of Anne Hathaway and Hugh Jackman while Russell Crowe was also there won 3 Oscars and earned £8.1 million in its opening weekend in the UK.

Just because something is popular though doesn’t make it good, he typed realising he’d already used his Dan Brown reference. Popular UK sitcom My Family anyone? Things could always do with a bit of added science and I would definitely watch a musical about evolution. Additionally there is some evidence that music can aid with learning as well as being useful in studying the brain’s natural plasticity. The Origin of Species: The Musical then seems like an ideal form of science entertainment. Primarily though I just thought it would be a fun idea to think and write about. So without much further ado, introducing The Origin of Species: The Musical! 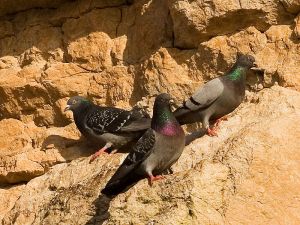 The introduction mainly establishes Darwin’s credentials as a naturalist.

Song: Naturalist In The UK

I am a scientist
I am a naturalist
I know what moths I want and
I know how to get them
I wanna catch butterfly.

Primarily deals with animal husbandry, plant breeding and selective breeding.  Darwin describes the astonishing diversity of pigeon breeds given that that they all descend from a single species of rock pigeon.

Darwin argues the arbitrary distinction between species and varieties with species merely being distinctive and well-established varieties. He then explores how varieties become separate species and introduces the concept of natural selection.

Taxonomy and Variety, work together, to help describe species
Side by side for example, defining different types of trees.

Darwin further describes natural selection through the relationships of all living beings and the physical conditions of their environment.  He also proposes sexual selection to explain sexually dimorphic features such as lion manes, peacock tails and some bird song.

Here Darwin discusses the effects of use, disuse and inheritance.

With untested thought proclaim:
Use it or lose it is the game.
Lamarck the disproved theory sings
This kind of inheritance isn’t a thing.

Darwin discusses the existence of intermediate forms and then whether natural selection could produce complex specialised structures. (It can.)

Song: Stuck In The Middle With Gills

Water to the left of me, land to the right
Here I am, stuck in the middle with gills.

This chapter covers the evolution of instincts using experimental evidence from ants and honey bees.

In this chapter Darwin addresses the idea that species have special characteristics which prevent hybrids from being fertile and preserve separate species.

Oh you’ll take the hybrid and I’ll take the within-species breed
And I’ll preserve the genome before you.

Here we get a bit of rock and look at how the geological record appears to show forms of life suddenly arising, without the multiple transitional fossils expected from gradual changes. Darwin then easily explains this by exploring the science and relative rarity of fossilisation.

Song: You Are Not A Stone

The biogeographical evidence is explored and Darwin notes the importance of barriers to migration in the formation of species.

Song: Island In The Sea

Island in the sea
That is where we are
Something between
Half our species gone
Go on breed with me
We’ll start to adapt
And given some mutations, ah-ha
We’ll begin our speciation, ah-ha.

Darwin observes that classification depends on grouping based on degrees of similarity.

Song: I Believe I Can Classify

I believe I can classify
Pick matching wings and classify
Using nature’s morphology,
To recognise homology.

At last we have the big finale where Darwin reviews the previous chapter and expresses his hope that evolutionary theory might produce revolutionary changes in many fields of natural history. It did.

There is grandeur in this view of life, with its several powers, having been originally breathed into a few forms or into one; and that, whilst this planet has gone cycling on according to the fixed law of gravity, from so simple a beginning endless forms most beautiful and most wonderful have been, and are being, evolved.

Now to get some musical skill, incorporate the differences between different editions of the book and write this!

45 thoughts on “On The Origin Of Species: The Musical”