A Stormtrooper gun. It’s possible they don’t know what these are for. Photo by Roy Kabanlit.

For some unknown reason, I’ve been thinking a lot about Star Wars recently. Going forward, I’ll assume you’ll be familiar with the events and characters of at least the first six films. If not, what have you been doing? Living in a recent, recent time in a galaxy that’s very close to here? Broadly speaking, this post inevitably contains minor spoilers for Episodes II−VI of the Star Wars films. If you haven’t seen them, inexplicably want to find out about Stormtrooper aim and don’t mind knowing some plot details, then feel free to read on.

There are some characteristics of characters or groups of characters within the Star Wars register that are widely held to be fact. This may be despite them not being explicitly stated within the films. Red lightsabers are for the evil, Jar Jar Binks is rubbish and Stormtroopers have worse aim than a urinating drunk man in a vibrating chair trying to hit a toilet located on The A-Team van.

Can Stormtroopers really be that bad at shooting? There is an assumption that the Empire want effective troops to maintain their evil hold of the galaxy. Surely they get some training in marksmanship rather than signing up, being given armour that doesn’t even protect against Ewoks (weirdly, the autocorrect on my phone turns ‘Ewoks’ to ‘useless’) and told to, “go forth and do bad stuff.” In fact, Obi Wan Kenobi in Episode IV: A New Hope comments, “only Imperial Stormtroopers are this precise” when examining some blast marks on a massive used droid dealership tank. So Stormtroopers have a reputation in the Star Wars galaxy for good aim. There are a number of explanations for this: 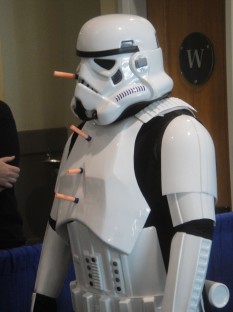 Why would Stormtroopers’ aim be so bad? Is it their tools? This seems unlikely given that non-Stormtroopers steal Stormtrooper weapons and seem to have no issue with shot accuracy or a gaining a reputation for terrible aim. Perhaps their helmets obscure their vision and make aiming difficult. Possibly, but the Stormtrooper helmet eye holes don’t appear to be any smaller than human spectacles, which can’t be said to obscure vision. Not if they’re doing their job. They are tinted though, which may make aiming difficult when in badly lit conditions and make Stormtroopers look like posers when wearing their helmets indoors.

Perhaps Stormtroopers are just human. In spite of the impression given to us by world events, it is actually quite difficult to get one person to actively shoot to kill another person. During World War I, British Lieutenant George Roupell reported that the only way he could get his soldiers to stop firing above their enemies’ heads was to beat them with his sword while ordering them to aim lower. Later reports of Lieutenant Roupell winning a medal for being a slightly charming human being may have been an exaggeration. Similarly in World War II, US Brigadier and army analyst S.L.A. Marshall reported that during battle, only 15−20% of soldiers would actually fire their weapons. This should perhaps be considered sceptically, as later analysis hints that Marshall may have fabricated at least some of his results. A 1986 study by the British Defense Operational Analysis Establishment’s field studies division found that in over 100 19th- and 20th-century battles, the rate of killing was actually much lower than potentially should have been the case given the weapons involved. Some reports from the Vietnam War state that the average US solder fired approximately 50,000 rounds before they hit their target.

Lieutenant Colonel Dave Grossman claims that psychologically this is a result of soldiers choosing to posture (falsely display active combat to attempt to intimidate or deter the enemy) rather than fight, flee or submit to the enemy. In this regard, posturing is chosen as the least costly (psychologically, socially and physically) of the four possible options available to a soldier in combat. In terms of Star Wars, we know that the Empire is not adverse to a bit of posturing with their giant shooty snow dinosaurs, Nazi-chic uniforms and ‘tis no moon space stations. Perhaps the legendary terrible aim of the Stormtroopers is simply due to a human tendency to try and look scary rather than murder another individual. Should they be renamed as ScaryLookingHugtroopers?

To even start to get an answer to this we need to at least get some idea of the accuracy of Stormtrooper aim. Luckily, counting exists and can be used get numbers for percentage purposes. In order to calculate the Stormtrooper hit rate, the number of shots fired by Stormtroopers in Star Wars Episodes II-VI (the ones with Stormtroopers and that aren’t currently in cinemas) was counted. The number of times that the Stormtroopers hit what they were aiming at was also counted.

Let the Wookie in. Photo by William Tung from USA (SWCA – A Stormtrooper and Chewie) [CC BY-SA 2.0 (http://creativecommons.org/licenses/by-sa/2.0)%5D, via Wikimedia Commons

Stormtroopers were identified as such by their armour. Han Solo and Luke Skywalker were not counted as Stormtroopers when they were wearing said armour as a disguise. The Stormtroopers wearing the special armour in Episode V: The Empire Strikes Back (the ones dress as Arctic pepper pots) and in Episode VI: Return of the Jedi (the ones with helmets like sad bulldogs) were counted as Stormtroopers. A hit was counted as such when a Stormtrooper launched or fired a projectile that hit what the Stormtrooper was judged to be aiming at. A miss was defined as when that stuff happened but the projectile didn’t hit the target. When the final resting place of a projectile was not seen on screen, it was presumed to be a miss, unless there was some kind of sound effect that hinted otherwise (like a character saying, “Ouch, this laser wound is relatively painful”). Only shots fired from hand weapons were counted. Shots fired from vehicles were not counted as some sort of computer-aided guidance may have been used. We know they have that and that’s it’s not as good as trusting your feelings when you’re a bit forcey.

It should be noted that the resulting Stormtrooper accuracy ratings will be rough estimates only. It’s quite difficult to count shots fired in the reasonably frenetic action scenes of these films and it is likely that the number of shots fired here is an underestimate. Also it’s not real and this may be a waste of time.

However, many have noted that during the events on the Death Star in Star Wars Episode IV: A New Hope, the plan was to let Princess Leia and company escape so that the Empire could locate the Rebels’ headquarters and blow it up along with the planet they were on. The Empire is apparently not that concerned about conservation. Or about killing lots of people. As such, it is likely that the Stormtroopers firing on the protagonists had been ordered not to kill their escaping prisoners. This may change the accuracy rate for this film as we suddenly have to count every miss in these sequences as a hit. So the space abacus (calculator) was broken out again and the Stormtrooper shot accuracy rate for Episode IV and the overall Stormtrooper shot accuracy was recalculated. Table 2 shows these new figures.

Table 2: Stormtrooper shot accuracy in the Star Wars films (assuming they were aiming to miss during those bits on the Death Star in Episode IV).

Suddenly, the accuracy of Stormtroopers doesn’t look so bad. In order to determine if this is the case, it is necessary to compare these rates with others. Ideally, this would be with other accuracy rates from the Star Wars films (probably not Greedo’s) in order to remove any confounding windy, wobbly drunken influences that the Star Wars galaxy might have. I didn’t do this for reasons of time, illness, difficulty and laziness. However, we do have some shot accuracy rates from our galaxy. These are shown in Figure 1.

If we discount the US sniper (unfair to compare to a trained specialist with more time and calibrated equipment) and the archerfish (a fish which spits water at land-insects in order to eat them and which is rarely found in conditions of modern warfare) the Stormtrooper is four-times more accurate than our only remaining comparator, the average US soldier aiming at a human-sized target from 300 metres. If we accept that reduced soldier accuracy is due to posturing in favour of other combat choices, it suddenly seems that Stormtroopers are choosing to fight rather than flee, posture or submit. This makes Stormtroopers seem less human and more terrifying. Fitting soldiers for the Dark Side indeed and certainly not deserving of their reputation for inaccuracy! Unless they didn’t read the Death Star memo. Then, they’re just average.

28 thoughts on “How bad is Stormtrooper aim exactly?”