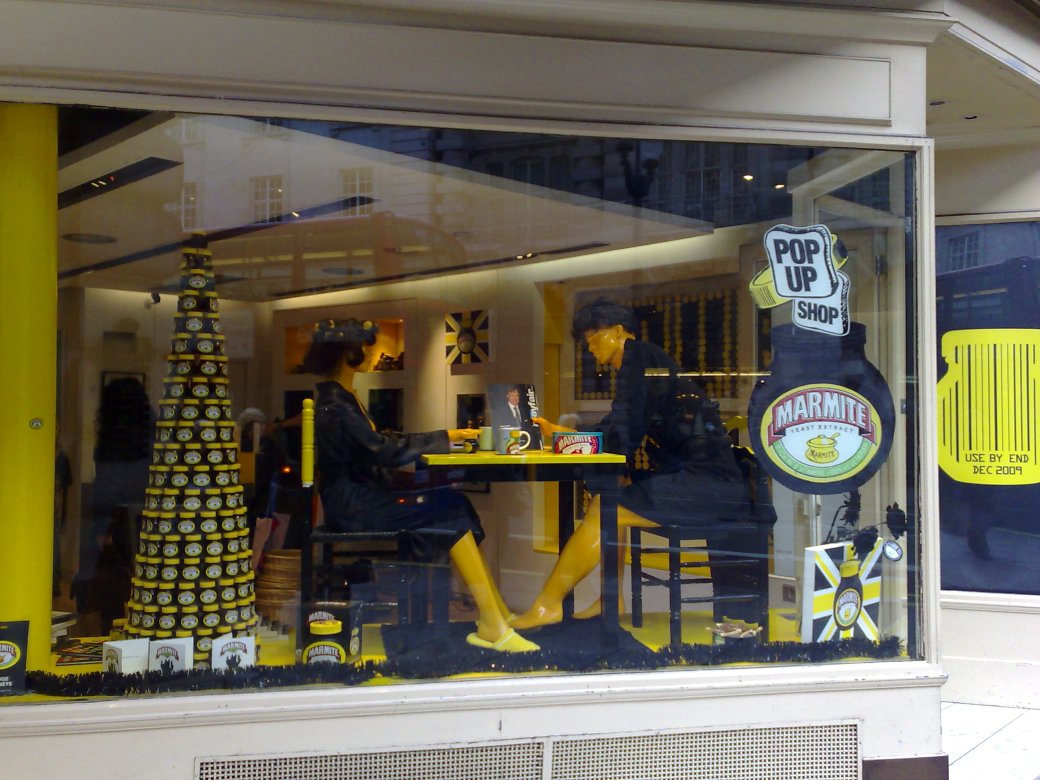 What do you get for the person who has everything? And who you also hate? By Gilda from London, UK (Marmite pop-up shop Uploaded by Edward) [CC BY-SA 2.0 (http://creativecommons.org/licenses/by-sa/2.0)%5D, via Wikimedia Commons

Jokes about Marmite; most people don’t have strong responses to them. This is unlike the recent news that as a result of potential Marmite price rises, one supermarket might have stopped stocking it. It was generally reported that people were furious with rage, which continued when the dispute was resolved approximately 24 hours later. And because it was opinions on the internet, people said that those opinions were wrong. And because it was definitely opinions on the internet, people went out of there way to say how little they cared about the issue. Whatever your thoughts regarding this particular spread, it’s difficult to deny that the specifics of its one “you either love it or hate it” advertising slogan have been pervasive. So much so that the name ‘Marmite’ is almost synonymous with something which polarises opinion. It’s a real Marmite situation. But what’s the question at the end of the first paragraph that reveals what the rest of the blog post is about? And is it true that people either love or hate Marmite, with no place for yeasty apathy? Luckily, surveys, maths and toast could be used to check.

The information regarding people’s opinion on Marmite was taken from the YouGov UK website. According to this website, YouGov survey approximately 5 million online panellists from across 38 countries including, among others, the UK, USA, Denmark, Saudi Arabia and Europe and China. They claim that their panellists are from a wide variety of ages and socio-economic groups, allowing them to create online samples which are nationally representative. The UK panel, from which the data used here were taken, includes more than 800,000 people. So essentially I went to the YouGov UK website, searched for ‘Marmite’ and took the numbers regarding what the people sampled thought of it. And ate some toast. 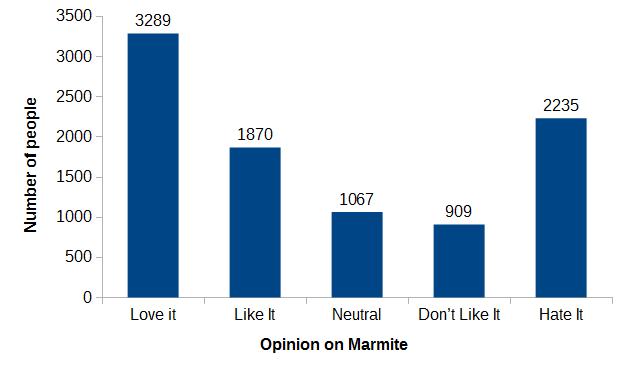 Figure 1. Numbers of people with certain opinions regarding Marmite.

You can see that the two tallest bars are for Love It (3,289 people) and Hate It (2,235 people), followed by Like It (1,870 people), Neutral (1,067 people) and Don’t Like It (909 people). However, these aren’t necessarily the groups we’re interested in. The claim is that people either love or hate Marmite. Figure 2 shows the number of people of love or hate Marmite (Love It plus Hate It) and the number of people who don’t feel that strongly about it (Like It plus Neutral plus Don’t Like It). Of the two populations, Love It or Hate It (5,524 people) is larger than Don’t Feel That Strongly (3,846 people). This is perhaps shown more intuitively in Figure 3, where it is depicted that compared with people who don’t feel that strongly about Marmite, 17.9% more people love or hate it. 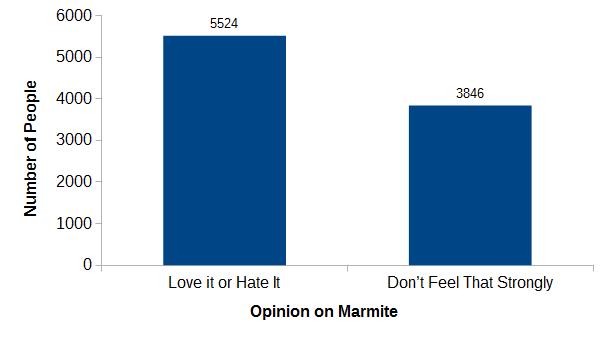 Figure 2. Numbers of people who love or hate Marmite and who don’t feel that strongly.

The presence of a group of people that don’t feel that strongly about Marmite would seem to contradict the idea that there are only two populations with respect to Marmite desire. However, it could be argued that we are really examining the effect of Marmite on Marmite apathy. Does Marmite have an effect on whether you love or hate it or don’t feel that strongly about it? What is the probability of this many people loving or hating Marmite if Marmite doesn’t make you love or hate it? 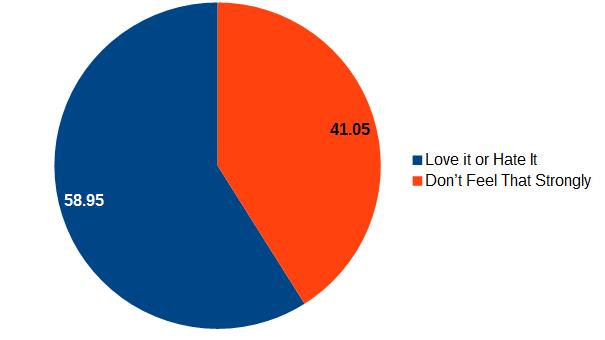 Figure 3. Proportions of people who love or hate Marmite and who don’t feel that strongly.

As this was a single population (people who give their opinions to YouGov UK) and we are looking at two possible categories within that population (Love It or Hate It and Don’t Feel That Strongly About It), I used a binomial test to determine the probability that there was on effect of Marmite on Marmite emotiveness. This demonstrated that the chances of this many people loving or hating Marmite if Marmite doesn’t make you love or hate it was at least 1 in 100,000,000 (P<0.00000001). Depending on your threshold for such things, this would seem to be reasonable argument that Marmite has a tendency to make people feel strongly about it.

There are some potential problems with this reasoning. Firstly, the analysis could be wrong. I’m far from an expert in statistics, and it’s entirely possible that I performed the wrong tests or interpreted the results incorrectly. While eating toast.

Secondly, these data only covers people who provide information to YouGov UK. While YouGov UK would certainly claim that they are representative of the whole population, we can’t know this for sure. The same YouGov UK page claims that being a Marmite customer correlates with having gardening as a hobby and being a customer of Waitrose, and I can count on the finger of know hands the number of times I’ve seen someone pruning the roses, while eating a Marmite sandwich and some Waitrose pickled quail eggs. This is a real product, although I think it’s cruel to pickle quails. Although, that’s not really the issue. Ultimately, there might be something different about the people who report to YouGov (such as a tendency to feel strongly about yeast-derived devil’s treacle) compared with the general population, and we can’t know that just from these results. Basically we’re saying that these results may be influenced by self-selection bias. 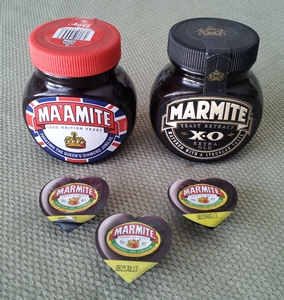 Well, what would you have put a picture of? Photo licensed under the Creative Commons Attribution-Share Alike 3.0 Unported license.

When people are in groups, their opinions and behaviour have a tendency to be more extreme than when they are acting as individuals. This is known in psychology as group polarisation. For example, if you have racist and sexist attitudes and join a group with racist and sexist attitudes, your racist and sexist attitudes will worsen; the group influence will trump your own lesser tendencies. Ahem. This process has also been seen to occur through social media, even though people aren’t physically interacting as groups. Observed over time on Twitter, discussion regarding political issues with like-minded individuals becomes more homogeneous and more extreme. In this instance, the hypothesis is that people identify with others who have a similar opinion to theirs regarding Marmite, and over time polarise that existing opinion until they state that they love or hate it. In reality, the truth is closer to a more moderate Marmite approval or disapproval. However, the online poll doesn’t involve group discussion and polls are completed anonymously, so even if people are basing part of their social identity on how much they enjoy a salty brown loaf goo, group polarisation seems unlikely.

Alternatively, the well-known advertising for Marmite may have introduced another kind of response bias called ‘demand characteristics’. Here, participants in an experiment or survey change their response because they are in an experiment or survey. This is assumed to be an attempt to comply with what they believe the aims of the experiment to be. Respondents asked about Marmite may be more likely to give an extreme response based on the advertised ‘consensus’ that people either love or hate Marmite. And so the opinion spreads like a pun-based analogy.

Finally, it could actually be the case that Marmite has such a distinct flavour that people really are more likely to have an extreme response than an ambivalent one. Although at this stage you may have stopped caring. I prefer jam anyway.

8 thoughts on “Marmite: checking whether it really is a love or hate relationship”